Hello, my name is Shadow!

Shadow is sadly in need of a new home as he & the other male dog in the home are no longer seeing eye to eye.

. As he is a albino he is mostly inside to protect his eyes from the sun and also his skin. His eyes gets very red only from a while outside.

. He sleeps inside wherever he is happy but normally next to my bed but he loves to cuddle on the bed as well. I normally keep his coat short for the hair but does not fall out unless its very long.

. He is completely house trained and askes if he wants to go out. Even if he has a need during the nigt he will gently wake you up by putting his paw or face close to yours to wake you up and let you know he can not hold it anymore.

. He is over friendly when it comesvto visitors.  He loves everyone and anyone as long as they are friends of yours they’ll be friends of his.

. One problem that were unable to resolve is him jumping on everyone when greeting them. And he tends to sniff where he is not supposed to when he greets.

. He eats twice a day and gets treats now and then.

. He is not a big begger when you’re eating but will lie  beside you to let you know he is there if you’d like to give hom a taste.

. He loves to cuddle on the couch when it’s cold and he looks like a big teddy bear.  I also close him with a blanket at night when its really cold and he loves that.

. He does get alot of “nightmares” then we will just speak to him to let him know he is safe.

. He is absolutely terrified of thunder and loud engines and will shake and even come sit on top of your lap to feel safe. We allow it and take the time to getting him to calm down. After all they can’t speak and tell you how the feel but they do show you.

. We don’t take him out for walks as I’m afraid of other dogs and what will happen.  And I know that this isa big mistake on our part.

. He gets on very well with our female dogs and our small toy foxy is his favourite.  He also gets along very well with our cat. He sometimes chases him in the house a bit but just to play. I’m not sure though how he will be with strange dogs or cats.  We would recommend meets & greets are done.

. He loves to sleep.

. He loves attention and when you speak to him.

. He loves the word “biscuit” and knows exactly what it means and to eat them. From dog biscuits to normal biscuits.

. Once a while I give him some sinew to chew on.

. He also does not like water and is scared of the pool.

. He basically only knows a leash when he goes to the parlour and he behaves well. Just scared.

Shadow is a very loveable dog with a great personality.  He would suit a home where he is indoors most of the time & there is someone home to monitor his sun exposure.

Shadow lives up to his name, because he’ll follow you everywhere and sit and sleep where you are 🙂

He is very good with everyone including kids. I’m just not sure of small kids we don’t have small kids over really as my kids are all grown up. He loves to play but also jumps against you when he’s over excited.  But he’s really very lovable and loves to cuddle with especially when he’s cold and appreciate a blanket as well. 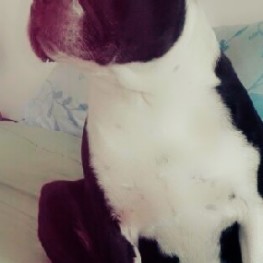 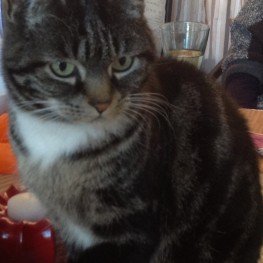