Hi all you awesome peeps I thought it was time to update you on the health of our very special “Little Bokkie”. You may not be aware that she has been rather ill for quite a number of months now and has been going to see our amazing specialist vet weekly for blood tests and scans.   She initially was extremely bloated and after tests at her first visit, it was found that she had an enlarged spleen and other severe problems with her immune system and liver.  This sweet little furry has been so good as each week she had to go to the vet and have bloods taken to see if she was responding to her many medical treatments.   It was quite amazing because she was still running around her little garden, chasing her ball or waiting eagerly for a rat to cross her path so that she can give chase.   You would never have thought or imagined just how sick she was.   The only real sign was that her appetite was poor and because she needed to take lots of medication for this problem finding a food that she enjoyed and that she was allowed, was quite a challenge.   It became quite a game to hide her meds in either chicken or liver paste or even peanut butter in such a way that she could not eat the part she liked and spit out the pills.     She was still thoroughly enjoying going on her regular walks with her tail wagging high in the air and of course, barking loudly en route as she passed by any other dogs telling everybody, in no uncertain terms, that it was her turn to go out and she is going to enjoy single every minute.   She also was continuing going to her regular obedience classes and doing very well. She is quite the little athlete! Jumping over the little jumps and taking all the obstacles in her stride.   One of her most favourite things is jumping into the swimming shell filled with soft balls and hidden underneath are lots of yummy treats which have to be sniffed out and consumed.   I must say Bokkie found every single crumb she could in the shortest time.   Then when finished would look up at her caregiver with her warm brown eyes – and a look that would make you melt – asking for more!!! She is just too irresistible and it is impossible not to give her an extra two or three.

She also has been going on some very impressive social walks with a number of rather handsome fur-gents at Dogtown and as her vigor improves we will hopefully be putting her in with one of these furries permanently.   Watch out all you furgents – a very pretty lady is looking for a new beau!!!!!

So peeps out there I just wanted to share with you the best news ever that we had after her vet’s follow-up today – her blood count is almost back to normal and at this rate we will be able to reduce her medication and Bokkie will be able to go to her forever home that we hope is waiting just around the corner. 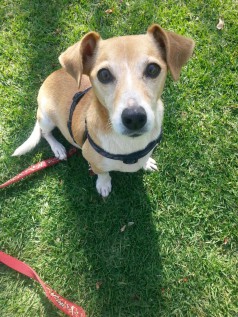