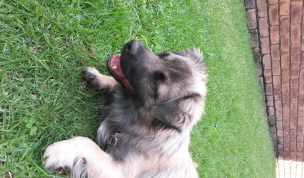 A pretty little Maltese blend by the name of Chummy has very recently joined the DogtownSA furry family.   His owner was worried that because of Chummy’s tendency to visit all the furgals in their neighbourhood, he would possibly find himself in an dangerous situation or, even worse, find himself out on the main road in the busy traffic.   Now he is living with us in one of our smaller runs and settling into the Dogtown routine.   Already he has started to learn basic obedience skills with his caregiver.   Each day he goes out for a walk and is beginning to understand that when his caregiver comes to put on his harness it means something really nice is going to happen.   He still wriggles and gets very excited at the sight of the lead but each day is getting better at calming down before going out of his gate.   One of the first lessons he is learning is to walk at a normal pace on the lead.   Initially he wanted to pull his caregiver along the trail as fast as possible.   I think he was worried that all the interesting scents and smells might disappear before he reached them.   Now with the aid of the appropriate correction and of course a yummy reward, he is learning fast that walking at a normal pace is pretty good fun and Vienna’s are really great to eat on the move.   Chummy has also learnt that when he goes out walking and the route turns to the “play area” he is going to be able to play his favourite ball games.   He loves to chase and catch balls and will bring them back to you over and over again.   He is very fast and alert and, in the play area because he does not have to keep his lead can enjoy the freedom of running around to his heart’s content. He also takes great delight in suddenly stopping and then diving into the many nooks and crannies hidden by the long grass.   As Chummy is a small little chap, all you can see are the grasses moving as he runs backwards and forwards chasing all the flying insects he has disturbed.   Since he has been at Dogtown he has also had quite a few social meetings with some of the other furkids and hopefully will be able to stay with one of them permanently. When he has had a few more socials and play dates he will then be able to move in with his new buddy permanently and have a bigger garden when they can play all day long.   He also thrives on human companionship and loves to be cuddled.   So if you have a furkid or two who loves to play and romp and is looking for a furry friend Chummy would love to be that friend.   He will promise to make you very proud that you took him into your family forever.