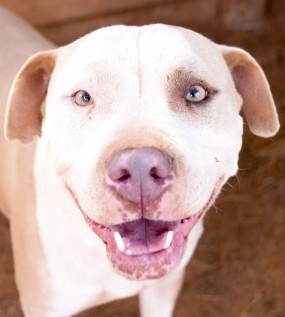 For those familiar with Greek Mythology, Zeus was the king of the gods, the god of sky and weather, law, order and FATE! Now my boy Zeus may not have been the king of gods, or the god of the sky, weather, law or order … but he was most certainly the god of FATE. How else can you explain his story?

One day long long ago (ok it wasn’t really that long ago but that’s how all good stories start) there was a pitbull named Zeus. He didnt have a name back then but the story would be hard to follow if I didnt use his name from the beginning. Anyway back to my story, so Zeus found himself in the streets, somehow. He was in good condition, he was neutered … it was obvious he was loved by somebody, but who? We searched high and low but his family was nowhere to be found. Zeus barely touched sides at Dogtown and then it happened …. cancer! Not only did our boy have cancer … but he had cancer in his …uhm … this is awkward so I’m just going to come out and say this … in his boy bits. Loooooong story
short, after countless appointments at our vet, surgery, more vet appointments, radiation, check ups, more radiation, UV suits and lots of dollars later, Zeus kicked the cancer!

So now our handsome Zeus was finally up for adoption BUT only to a very special home. He has to wear his UV jacket ALL THE TIME …. and I mean ALL THE TIME. He also needs to go for regular check ups and yes you guessed it, sunscreen to keep those UV rays at bay. From experience I knew that finding a good home is difficult as it is, but finding a super special awesome fantastic home where Zeus would always come first, would be damn near impossible …. But thats where FATE came in.

One day, while Zeus & I were minding our own business, there they were ….. his family! They met Zeus and it was love at first sigh …. his medical “quirks” and all! It was almost too good to be true. So the paperwork was filed, checks were done, playdates were arranged and yes, you guessed it ….. smooth sailings 🙂

Zeus was the first of the dogs in my care to be adopted. I was not quite sure how to feel and even after he sailed off into the sunset, I wondered if he will be loved, and cared for … and wear his UV suit ALL THE TIME …. Then the happy ever after updates and photos started streaming in and the smile on his face (and mine) could not be bigger.
Outings to the park, cuddling on the couch, running silly laps with his new brother – all the while wearing his super hero outfit …. it all just kept coming and I knew, Zeus was HOME, where he belonged. God of fate, I like to think so 🙂